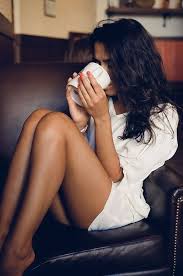 Walking into the lobby, Desire sighted him across the room, setting the table as though expecting a date. He was dressed casually, simply yet he looked exotic in his tees and palms. He stood to welcome her as he watched Desire walk to him.

“How are you?” she replied with a courteous smile, pulling a chair opposite him. He sat right after she did.

“Do you want something to drink?” he asked.

“A cup of coffee would be fine”.

He signals to a waiter who comes to take their order. He orders a watermelon smoothie for himself and a cup of coffee for her. Desire knew very few men who were as health conscious. It gave her another insight to him.

“How did your meeting go?” he started.

“It went well. My proposal was bought and I suppose I’ll be working more from the mainland in the next couple of weeks. As soon as I’m able to close out on implementations basically,” she explained indifferently.

“I thought this was to be a karaoke hang out”.

“Yes, but that only opens on Fridays. We can do it this Friday if you want”, he added.

“No no no!” Desire jumped. “This works just fine”.

He smiled, almost as though he’d just read her mind.

“Ok so you know my name and what I do for a living. You also know what my hobby is. Besides that, there isn’t much to tell”, she narrated dryly.

“True, I know all that – lucky me. What I would like to know is what I don’t know about you already. It doesn’t have to be official”.

“Really?” he was surprised. “You don’t look like you’ve been married that long”.

“I can see why. Please continue”.

“Well as you know, I love music. I collect music actually, dating as far back at the 70s. I dabble into some freestyles too but shh, don’t tell anyone. That’s basically my life in a nutshell”, she explained. “You?”

“Says who? You must definitely be a cool mom”, he commented.

“Oh well, I’m sure my children think highly of me”, she flushed as she spoke about her children.

“What about my husband?” the smile faded from her face when her husband was brought into their conversation.

“I was just trying to understand what the home front is like”, he said.

“It’s just as I want it to be – perfect. Thank you”, she said, keeping a straight face.

The waiter returns with their order and for a minute, there is a silence between them.

“Ok so you asked about me”, Tunji breaks the silence. “Typically, I don’t like to mix business with pleasure and I’ll explain”, he was quick to add when she raised a brow. “I don’t like to engage or deal with colleagues outside of work except it’s a deliberate bond exercise. I do what I need to and get out. This will be my first time meeting up one on one outside work”.

“Because I see a female version of me in you”.

Almost as if he read her mind, he said, “I’ll explain. I’ve never told anyone this but I had a crush back in school and I penned a lot of poetry for her, secretly of course. I never had the boldness to share them with her. The day she found out that I wrote, she didn’t appreciate that I did it for her. She thought I was being a sissy and she needed a real man with a tough mind. Because of that I lost my chance with her so I stopped writing and believing in such things altogether. But here you are, lover of music, poetry, you even freestyle your very own songs. It’s amazing; it’s commendable. Whether or not your children and husband think you’re a cool mom, it’s good that you’re keeping your fantasies alive”.

“I see”, Desire said, understanding a side to him that she wasn’t sure she needed to know. When she thought that he was letting out more than she needed to know, she was compelled to warn him. “I don’t like to mix business with pleasure either for obvious reasons – I’ll be putting myself at harms’ way. I’m a very private person. It doesn’t mean I don’t have friends but I don’t like to keep male friends”.

“Because at some point, they tend to want more than I can give”.

“So what are your limitations?” he asked, almost as if he hadn’t heard her or maybe he just wouldn’t be turned off. Desire couldn’t tell if he was offended by her confidence or if he was only just curious to know.

“First, they start by texting a lot. Then they want to call and stay on the phone longer than I have time for. Then later, they want to meet and hang out and I can’t afford that time. I would rather spend it at home with my family. I hardly get that opportunity with my crazy work schedule anyway”.

“I see. So how do you suppose you would manage our friendship?”

“I didn’t realize we need a structure about this”, she was being sarcastic.

“Well, for one like I said, this isn’t a chase. We have work to accomplish together. We have a common task to deliver on. So it’s different”. He seemed to have that as an excuse to be in touch. Desire gave up.

“So what else should I know?” she asked.