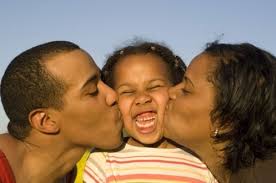 Whether a father loves more than a mother is the topic of debate
Where I come from, we naturally assume that no one can care for a child better than a mother. No one can do for you what you mother cannot do for you. Or rather in my brother’s words, no one can do for you what your father can not do for you. I know parents are the best thing or next best thing that can ever happen to a child but when I heard today of a debatable topic, whether a father loves a child more than a mother, I decided to give it a try to unravel so let’s learn together.
A mother births a child, having borne 9 months of discomfort and hard labor. Suffice to say that only 1 out of every 10 women survive child birth, I’d say that is a huge sacrifice for any woman to bare for the sake and love for a child. Now, whether that mother ends up loving that child above all else, I confidently say, is another issue entirely. I mean, I know of someone who has never spoken words of love to her child or someone who only puts her needs and comfort first even above the comfort of her children. Can we say that type of mother loved her child during those 9 months of discomfort and labor? Maybe. Or maybe it was only the idea of motherhood that drive some of us to want to birth a child.
Now where I come from, a man taking more than one woman is forgivable. So because of this we say, a father is to many as a mother is to one – her own. Because of this, we assume that a father has little or no sentiment and attention for a child perhaps because they are either too many for him to afford the attention to or he is busy trying to cater to the family. Yet I know of a man who willingly devoted all his life, time, love and resources to his children after their mother decided mothering was not for her. I know of a father who even after his daughters are married, he still wants to be involved and share their happiness.
… END_OF_DOCUMENT_TOKEN_TO_BE_REPLACED