So I was minding my business, flipping through the pictures on Instagram when I came across these controversial image messages.

I looked to see what people’s thoughts on these are and I thought it’d be interesting to share. Perhaps, you can join in the fun (or something).

Someone said: For men, it’s the greatest betrayal. A man can forgive a woman almost anything but infidelity sinks deep and somehow lingers in their memory forever

Another said: You’re very very very very very right. But my dear, if an adulterous woman is given a chance to defend herself, you’ll realize a greater % of them can be LOGICALLY justified.

It’s interesting to read people’s opinion on this. I know someone, a man, who once told me that if his partner cheats on him, he would really want her to just tell him the truth and fess up. So I asked – how would you then feel if he did cheat on you? And he said – I would want to know so I can understand why she did it. If it’s something I did or said wrong, I can learn from it and we can move on but not till I f*@k some sense into her. That was by far the weirdest reaction I expected from a man to a cheating or cheated spouse. 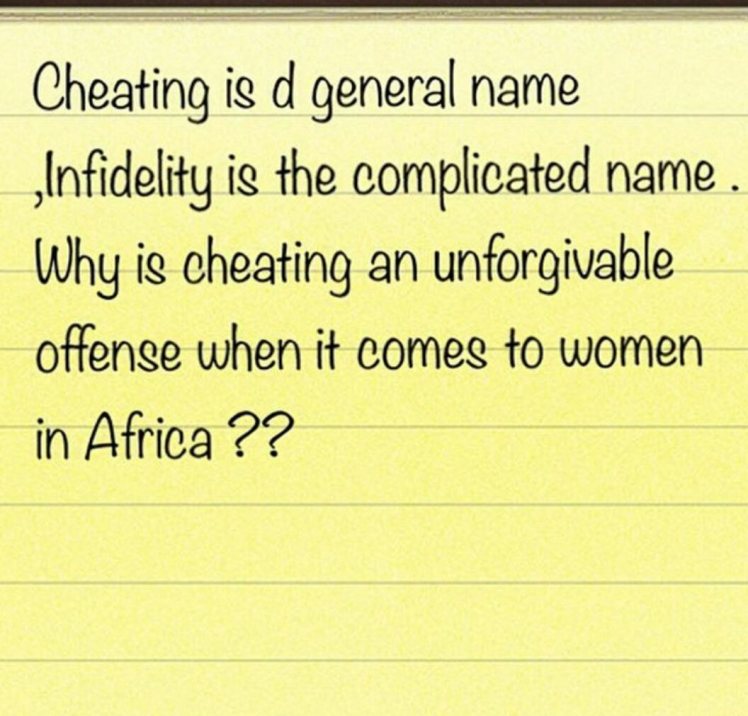 Some answered: In no particular order, I will make my submissions based on cultural, religious and social backgrounds:

And I rest my case. What are your thoughts on what’s acceptable and what’s not?

2 thoughts on “Cheating Spouses: On the Issue of Infidelity”